Information
Your benefits at a glance 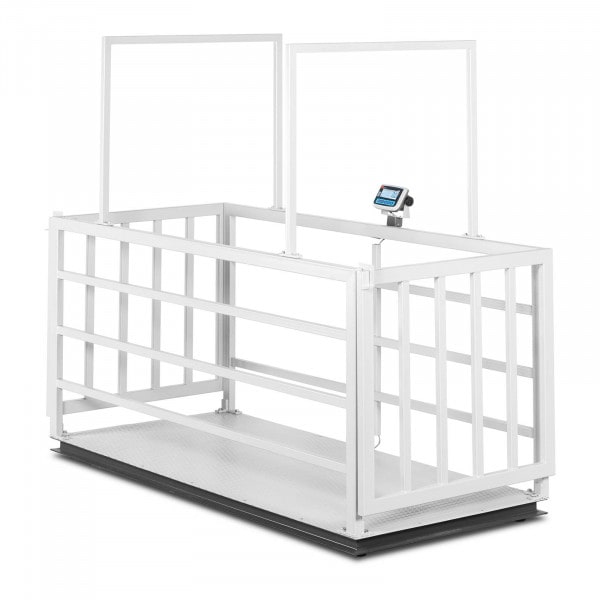 The highly practical veterinary scale with a fence from tem

The flexible livestock scale from tem

The 110 x 240 mm weighing surface made of low maintenance steel has plenty of space for larger objects or animals. The fence can be opened from two sides and prevents the animal from stepping off during the measuring process. Its sleek design ensures that the sheep scale does not take up any more space than necessary and makes it easier to load heavy weights. An integrated animal mode compensates for the natural movement of the animals on the veterinary scale.

The calibrated cattle scale from TEM has two measurement ranges. The scale will weigh objects up to 600 kg with a maximum deviation of 200 g; for animals up to 1,500 kg the maximum deviation can be up to 500 g. The measured values are displayed on an easy-to-read LCD display. All relevant measuring processes can be optimally covered via the functions tare, set zero, and reset.

The veterinary scale is powered by a battery and has an incredible battery life of up to 100 hours. A status indicator warns you before the battery is depleted.

The veterinary scale from tem complies with the regulations for trade. This is confirmed by the quality mark M on a green background. It is delivered already calibrated and certified. This first certification is valid for the first two years of use, after which the calibration should be recertified by an authorised person according to national regulations. Only then will the scale receive the sticker of official calibration. After two years, the scale can be recertified by the certification authorities. You will also receive a declaration of conformity which you should keep with the scale.

Note: Due to legal requirements, this scale cannot be delivered to Switzerland.