Your benefits at a glance 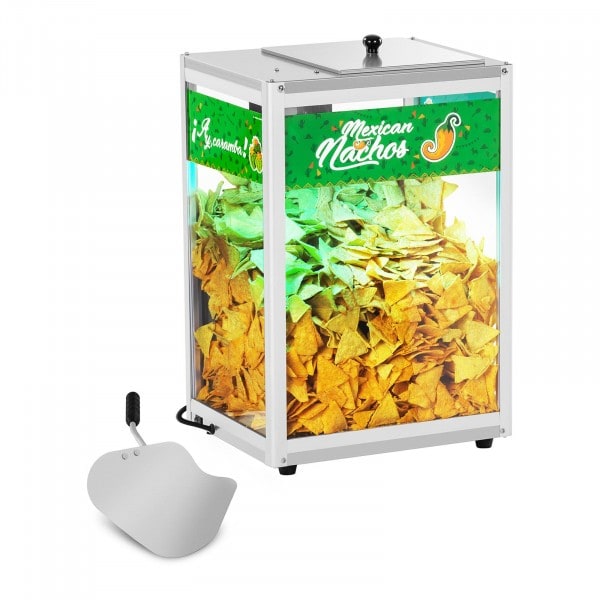 A remote-controlled LED-RGB light bulb on top of the machine will put the spotlight on your crispy nachos, popcorn or peanuts. It glows in 16 different colours, based on the three primary colours red, yellow and blue. The LED RGB lights of the nacho warmer glow in every colour imaginable.

You can change the colours with the remote control (included in delivery) and choose between six different effects. Thereby you can adjust the brightness or deploy the flash- or stroboscope-effect, and brighten the mood of the evening. Other functions allow you to turn the lights on gradually or cross-fade them, as well as adjusting the rate of the light changes.

Warm nachos, popcorn and other snacks in next to no time! The food is constantly warmed by both top and bottom heat. The efficient 100 watts heating element is integrated into the bottom of the device and heats the container to up to 65 °C. Tempered glass further isolates the machine, while keeping the heat inside. For offering fresh, warm and delicious nachos to your customers, the nacho warmer is the best choice. The 40-litres heating chamber has enough space for up to 4.5 kg of nachos, which amounts to about 45 servings.

The casing is made from stainless steel and is therefore especially durable and easy to clean. Additionally, the holes in the bottom ensure that crumbs fall into the collecting drawer. The nacho station is filled from the top. A diagonal aluminium plate on the inside reduces the impact and prevents the crisps from breaking, as well as making their removal easier. For your protection, only tempered glass has been used. In case of damage, the glass does not burst into thousands of small, dangerous shards like common glass. Rather, it bursts into small, dull shards of tempered glass, thereby increasing everybody’s safety and preventing injuries. It is the best solution for keeping the kitchen safe when there is a lot going on.

Let your imagination run wild and enchant your guests with colourful lights. Stylish lights make your guests feel welcome, be this in a restaurant or during an outdoor event. The space-saving, compact size and the rubber feet ensure a sturdy footing on any surface. The low weight of only 10.6 kg makes the machine remarkably easy to transport and to store.

The nacho warmer is easily integrated into any buffet thanks to its compact design. The stainless steel shovel has a plastic handle, which allows you to portion the food quickly and consistently. The special shape of the shovel makes removing the nachos easy and allows you to quickly fill the trays.

If you put a bain-marie next to your nacho warmer, you can also serve warm and delicious sauces and dips with the nachos. Buy this premium machine today - the nacho warmer RCNW-1L from Royal Catering - and your customers will keep coming back.

Are you looking to serve your nachos with salsa, BBQ-sauce or cheese? Check out our bain maries.

The story goes that nachos were invented in Piedras Negras in Mexico. Piedras Negras is right next to the border with the Eagle Pass. In 1943, a group of Americans came to the Fort Duncan Air Base to eat at the Victory Club. Since the cook was nowhere to be found, a waiter called Ignacio Anaya went to the kitchen and improvised a dish using the food he could find. The waiter cut tortillas into triangles, fried them, added cheddar cheese, warmed them up and added jalapeños.

When Ignacio Anaya was asked to give the name of the dish, he said: "Nacho's Especiales", because the Mexican nickname for Ignacio is Nacho. Not long after, the owner of the club added the dish to the menu and kept the name. Later on, Ignacio Anaya even opened his own restaurant called "Nacho's Restaurant" in Piedras Negras. The dish quickly spread all over Texas and the South West of the United States. The original recipe was printed in St. Anne’s Cookbook in the year 1954.

Ignacio Anaya died in 1975. There is a commemorative plaque in Piedras Negras. The 21st of October is the international nacho day. Anaya’s son, Ignacio Anaya Jr., was a judge at the nacho competition until his death in 2010.

The classic version is made from nachos, cheese and jalapeños, but there are many variations of this dish. A popular version is made with a fried tortilla, coated with bean paste. It is covered with a few layers of chopped cheese. A warm, spicy Habanero sauce covers this kind of nachos.

Barbecue nachos are served without cheese. Sweet dessert nachos and poutine-nachos are other popular choices. They are less traditional versions of the popular dish.

The most popular ingredients for nachos today are cheese, guacamole, salsa, cream, jalapeños and salad.

Nachos with a lot of different ingredient are also called "loaded nachos", "super-nachos" or "epic nachos". This kind of dish is often served in the USA as a starter dish, even though they are the size of a main dish. The nachos are placed onto a plate. Ingredients like meat or beans are added and then they are covered with grated cheese. The dish is afterwards heated in order to melt the cheese. Then, further ingredients like salad, tomatoes, peppers or onions are added.

The international nacho-festival takes place from October 13-15 in Piedras Negras, the birthplace of Ignacio Anaya. There are concerts and cultural events, as well as a competition for the largest nacho dish in the world.

The nacho warmer RCNW-1L from Royal Catering has been specially designed for both professional and private use. Its 100 watts heating power keeps your guests’ nachos warm and crispy, as well as warming popcorn or peanuts. The nacho warmer has LED RGB lights and is the first-ever snack warmer of this kind. A must-have for cinemas, events or parties! Nachos can be served as a main dish, accompanied by other side dishes in restaurants, bars or on buffets. 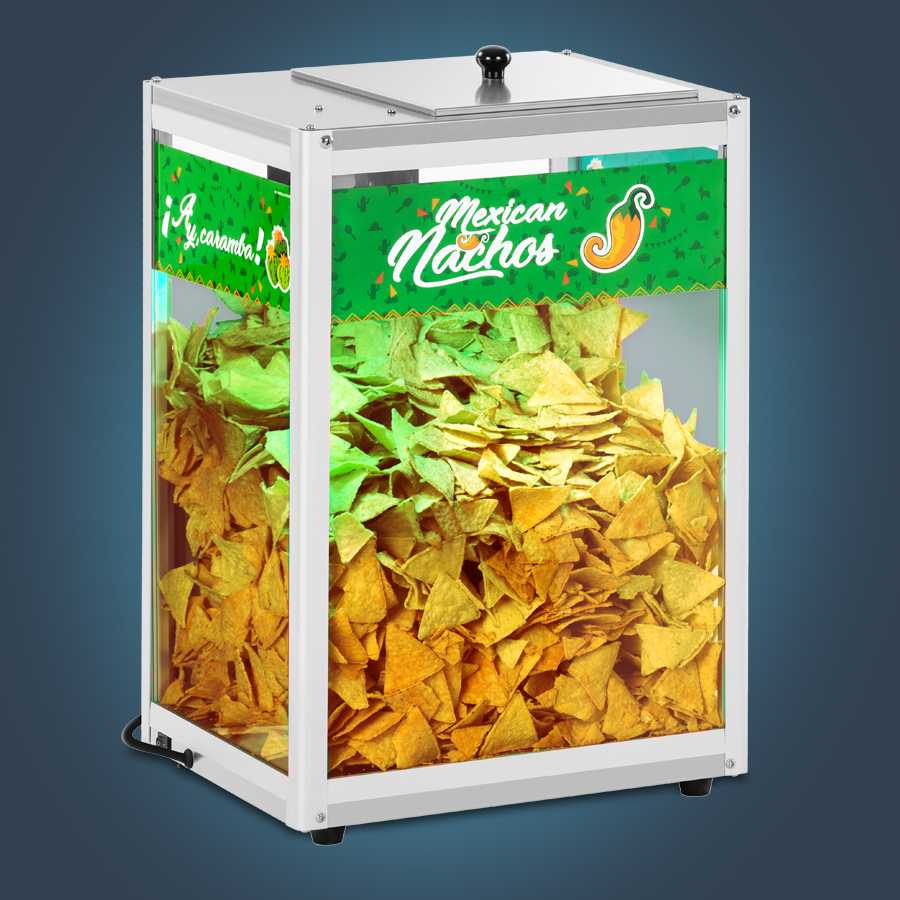 for up to 45 portions of snacks 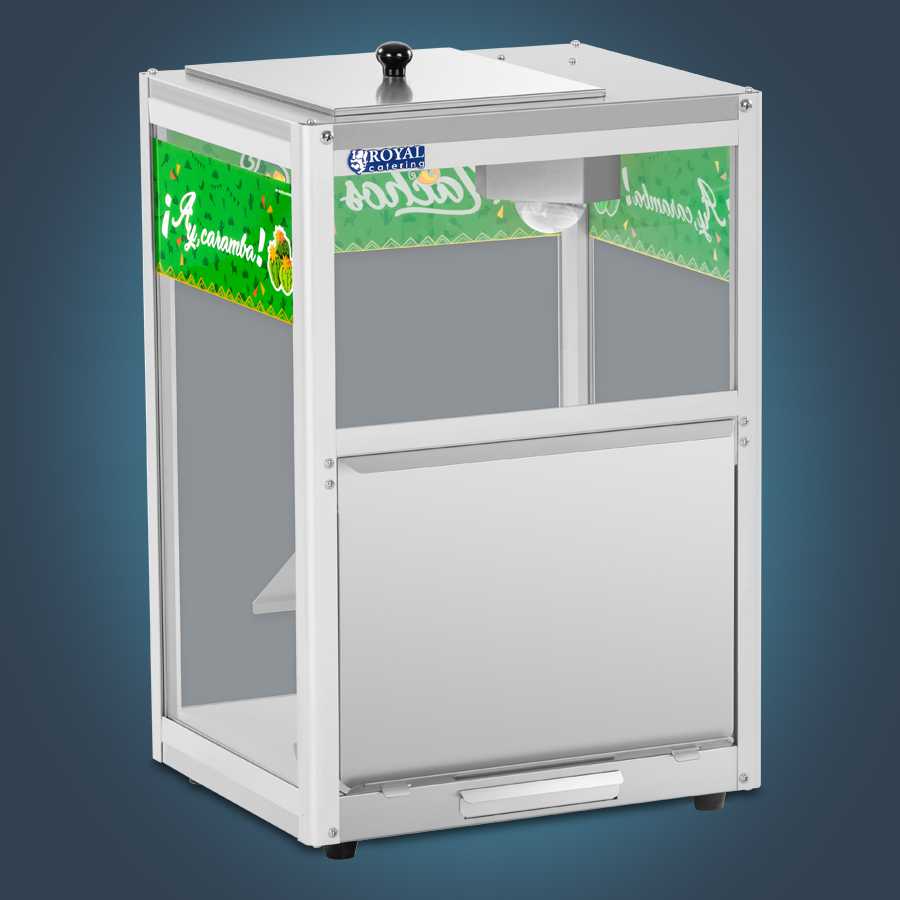 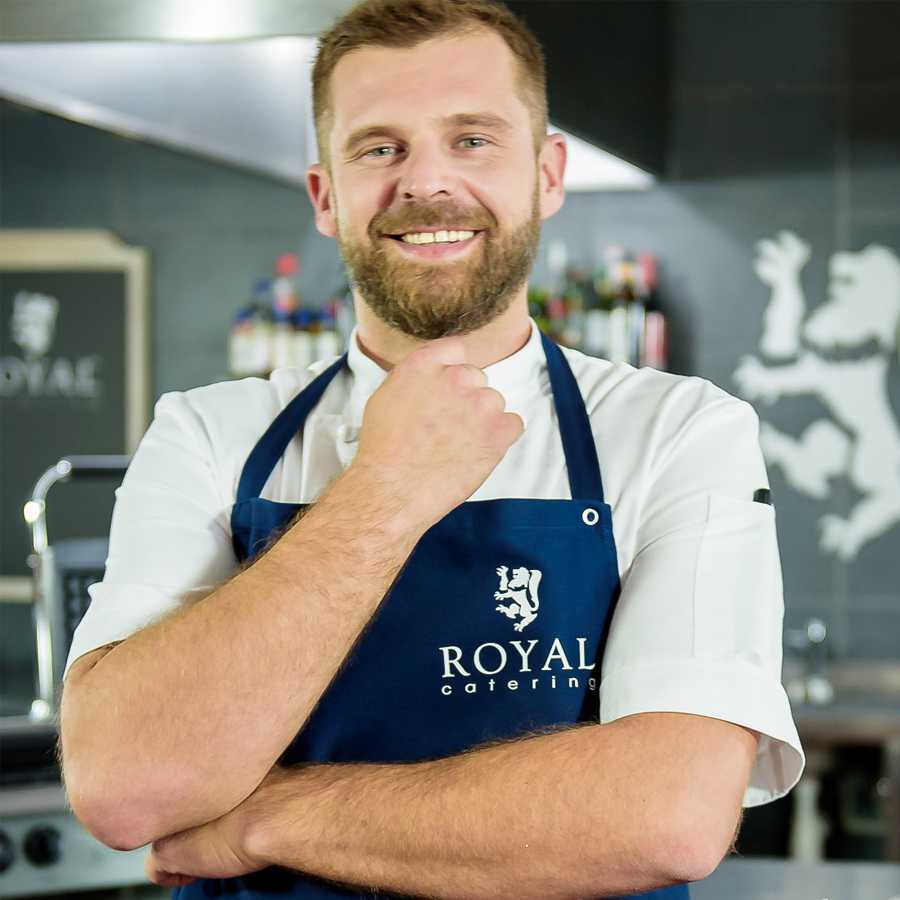 Michał Orłowski
Culinary expert, head chef for renowned restaurants in Sydney and Warsaw. A professional, just like our customers. 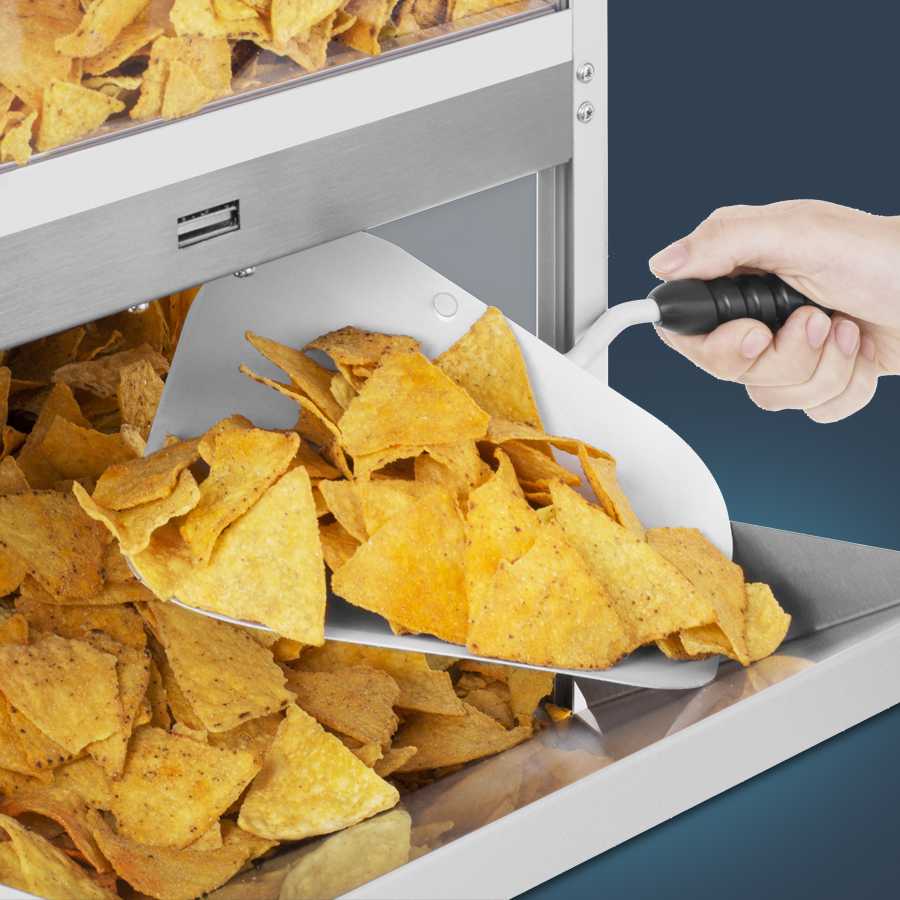 up to 6 light functions and 16 colours available

adjustable intensity and frequency for the changing colours

For cleaning and maintaining the device use a cost-effective solution of water and oil.

a thermostat keeps the temperature constant 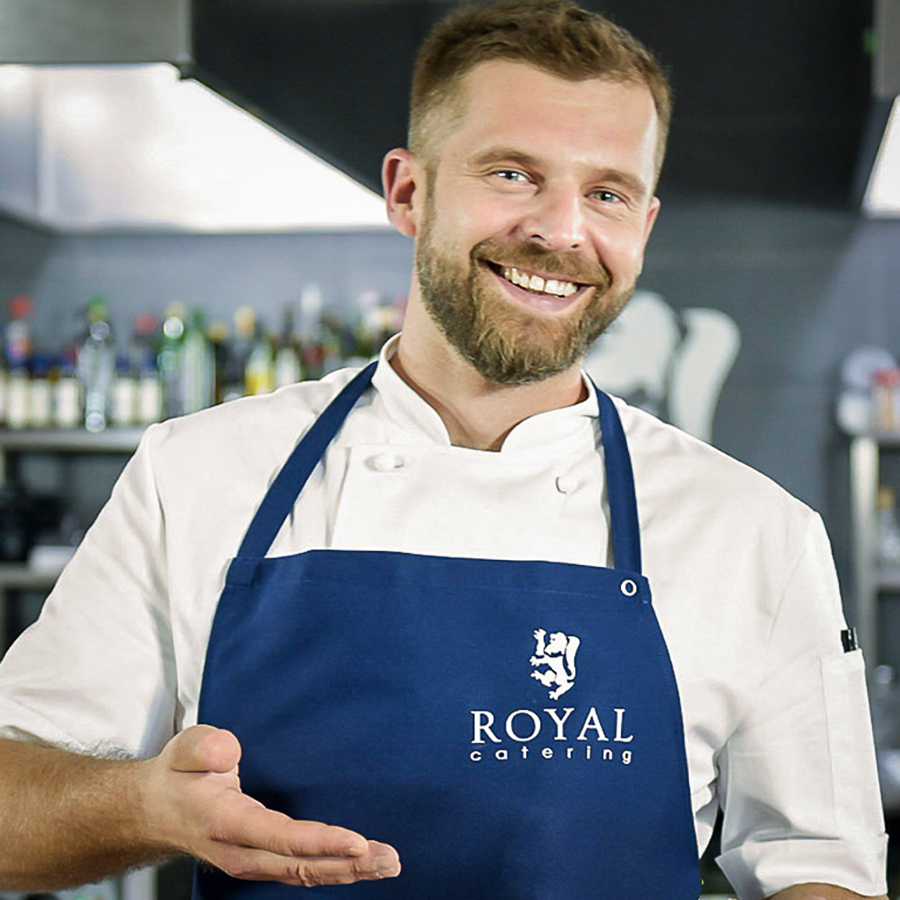 I work with professional products every day. For this video, I made sure to test the device thoroughly. You can take a close look at how this product works and then decide which model is best for your business. I hope my video and tips will help to make your business even more successful.

Head chef of prestigious restaurants in Sydney and Warsaw. An experienced and professional restaurateur

£2,605.00
Details
By clicking “Accept Cookies”, you agree to allow us to store cookies in order to enhance site navigation, analyse site usage, and assist in our marketing efforts, e.g. for personalised advertising. Find out more here: Privacy Information
Accept Cookies